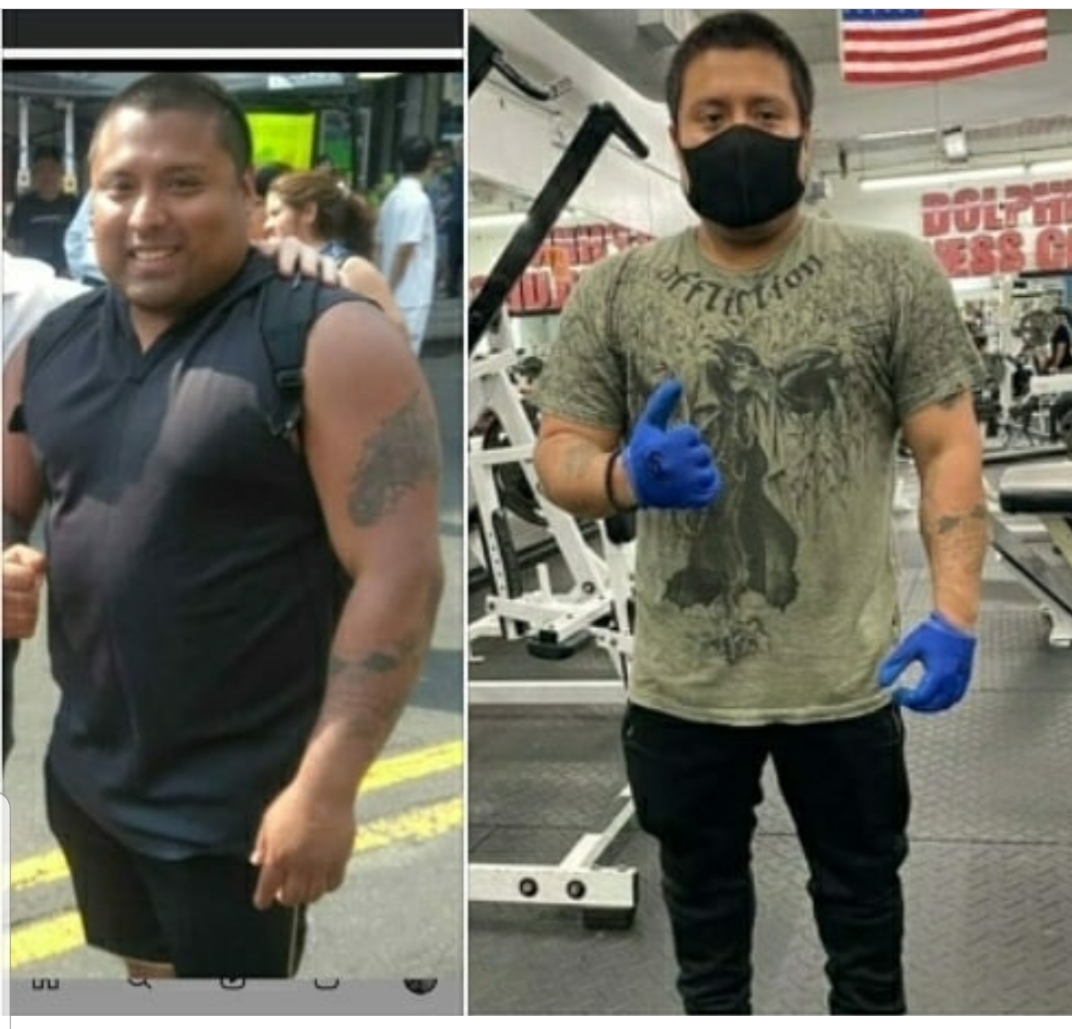 A journey of a thousand miles begins with one small step, and for Edgar Perez, that journey began at Dolphin Fitness.
Born and raised in Brooklyn, New York, Edgar played soccer throughout high school, and always maintained a certain degree of physical fitness. As time went on, and life’s responsibilities took over, Edgar noticed that his stamina and endurance had peaked – he was having a difficult time just getting around.

“I couldn’t even walk, I was so out of breath,” remembers Edgar. “My pants were too tight, my shirt was too tight – it was a problem. I would get tired just walking down the street.”

Edgar decided to make a change and joined Dolphin Fitness. Beginning with weight training mixed with light cardio, Edgar quickly noticed improvements – from progressive weight loss, to a boost in self-confidence. He increased the frequency of his workouts from a few days a week to six days per week, and began boxing training with Dolphin’s resident boxing trainer. The improvements continued.

“I’m lighter on my feet, and I don’t feel tired going up the stairs anymore,” Edgar reflects on the positive lifestyle changes he’s experienced since he made a commitment to his health. “You start making these adjustments, and it becomes a way of life. A healthy way of life.”
Asked why he chose Dolphin Fitness as his fitness home, Edgar eagerly answers: “I have a lot of friends here. We help each other, and we give each other tips. There’s a camaraderie that we all have – it’s like a second home. It’s just a great atmosphere.”

Now, in the four years since his fitness journey began, Edgar has lost over 100 pounds, gained immeasurable self-confidence, and is working on more targeted fitness goals, such as lowering his overall body fat percentage. It all began, though, with a simple decision, made four years ago.

“My advice to anyone that’s unhealthy and feeling like they can’t do it – just take it one step at a time. And when you start seeing results – small victories here and there, like putting on muscle or getting leaner – then you’ll fall in love with the process. And that’s gonna fuel you to keep going.”

Edgar doesn’t discount the notion that, often, the hardest part is motivating yourself to just show up for the first time: “It’s up to you to make it happen for yourself. And it’s not impossible – that’s coming from someone who was once over 300 pounds. I weigh 185 pounds now, and I feel amazing – I’m in the best shape of my life!”

While Edgar may have made the initial decision to join the gym, he credits Dolphin’s community vibe with keeping his motivation going: “We support each other. Once you have that great support system, a place where you feel comfortable – that makes a huge difference in working out. If I need a partner, I can always find one. I love it here!”